After a crash such as Silver experienced in May, there is most commonly a capitulation type of bottom followed by a strong rally.  For example, SPX capitulated in March 2009.  Silver never capitulated, but rather the lengthy period of sideways trade from mid-May to mid-July seemed to absorb the selling pressure sufficiently to bypass a capitulation.

The end result is that Silver could have one additional push higher in coming days due to the larger cycles in place.  From my point of view, the cycles for SPX are very negative going into August 10th +/- 1 day.  Lately Silver has been inversely correlated with SPX, therefore, Silver could be setting up to push higher into the 10th.

However, due to the larger cycles, this also means that Silver topped in April, and a major lower high could complete by mid-August with a steep decline to follow.

The picture for the US Dollar is the opposite.  There are clearly serious problems with fiat currency in the long run, but this is not the time for a real crisis in the US Dollar.

After the topping process is complete, extreme weakness is anticipated for Silver.  With some small bounces along the way, the target is $18, and eventually much lower.  Ultimately, I see all of this being the early stages of a long term bull market for Gold and Silver. 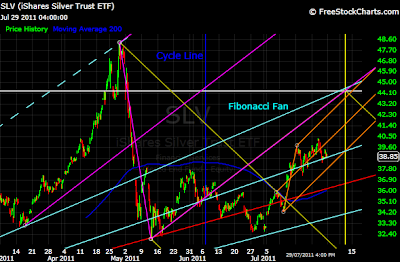 The July 22nd time cycle was a major cycle, and that resulted in a high, and then reversal with a sharp selloff.

The market may pause soon, but bounces may only be moderate, and another sharp decline appears likely.  As far as timing, a bottom target near 1263 may be approached in as little as a few days time.

August 10th +/- 1 is also important, and a significant selloff into that date is anticipated.  It is possible that is the bottoming date if things develop a little slower. 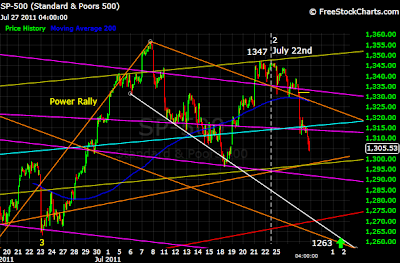 The 1347 SPX target was hit exactly on Thursday, July 21st.  The time target was met on Friday, and suggested some type of decline next.

The news in the media is currently dominated by negative reports of potential US default, and breakdown in debt ceiling/budget negotiations.

However, when the Financials index Rifin is plotted versus SPX (as shown below), Financials were clearly leading up last week.  GS, for example, was a very strong performer despite weaker earnings.

It is necessary to upgrade to a significantly more bullish stance given the above facts.  Additional updates will be forthcoming with price and time targets.  For now I will say that a move to 1360+ appears likely next. 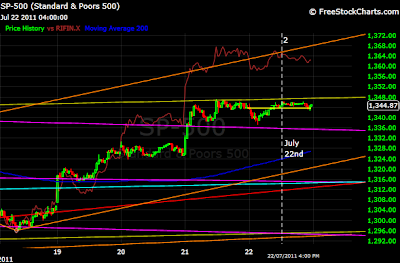 There has been support lately from the turquoise fibonacci fan.  The current symmetrical configuration may be indicating that the top is in, or near.  Even with this configuration there may be some further whipsaws and testing.

Further price action will be useful to review closely for confirmation of completion. 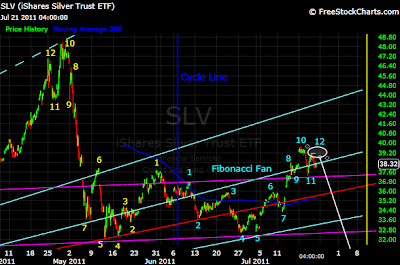 There may be a retracement back to the 1303-1308 zone next.  A continuation of the rally may then follow into the time cycle July 22nd.  The estimate for that high is 1347 although a double top in the 1350's may be possible.

This upcoming week could be quite volatile with high profile budget news anticipated.  I don't think that the bottom is in quite yet, but it does appear to be close to bottoming.  1303 is an important Red trendline.  I also see multiple supports in the 1295 area.  It is difficult to be precise with smaller movements, and it is possible that the market does not make it below 1300 SPX.

I see Tuesday July 19th being important, and the market may decline on the budget/debt ceiling news initially with a rise in the dollar.  However, I see a strong push higher likely into the end of the week with an important time cycle due on July 22nd.

I am continuing to anticipate a shock wave to hit markets this week as I anticipate budget/debt ceiling agreements imminently.  Tuesday seems most likely for the announcement.

Silver closed at the pink trendline resistance on Friday, and could see some early weakness with a grind slightly higher later on Monday.

The dollar should surge up initially on the news with Silver declining rapidly to point 9.

I am anticipating a resolution to the debt ceiling shortly.  There are multiple major supports on SPX at 1310, therefore, I expect today's slight undershoot low at 1306.50 to hold.  This represents a significant bear trap on a short term basis.

However, a major cycle low is estimated on August 11th +/- 1 day at 1276 SPX.  Further details will be outlined on the 30min charts in the near future.

The explanation for the surge up today and yesterday in precious metals shows up in the symmetry charts.  I call Silver the "Silver Snake" because it is deceptive in the way that it trades with high volatility and "sneaky moves" often with large overnight gaps.

As usual I am early in my positioning.  However, on the plus side I see the bigger picture developing and the timing has also become clear.

For markets and precious metals watch:

When it comes to the markets there are no forks in the road.  The price will only go in one direction.  It can never go one way or the other.  Symmetrical analysis will show which direction is correct.  The symmetry shows clearly that Silver and Gold are nearing tops with severe declines to follow.

Bearish sentiments for Gold will be allieviated to some extent by the current grind up.

I see Gold is very close to topping out so I will keep my full short position in place for Gold and wait.

Silver does have a little upside, and I will probably make some short term trades to better position.  It was a little early entry, and can do better.
There is certainly nothing wrong with just staying focused on the bigger picture, and wait for the bottom around August 10th.  Re-positioning may be advantageous, but is tricky and is not necessary either.
2hour Chart﻿

So far the SPX plan from July 3 has been working well as shown below with the Before/After charts.

There isn't much I would change to the plan.  The markets may need to spend a little more time firming up at these levels than shown in the lower chart.  Maybe we could see a small bounce and retests for example.

Next, another strong rally back to 1340's SPX is anticipated.

Gold Miners (GDX) have been an excellent leading indicator with relatively close correlation to Gold itself.  As shown in the comparison chart below, GDX was leading up until early April, and topped prior to GLD.  Since then, GDX has been trending sharply lower.  The gap between GDX and GLD performance is enormous, and suggests that the Gold bubble is about to pop with a crash.

I see the first major support for Gold around $1,300 with some consolidation in that area, and a final target for Gold near $1,250.  In percentage terms, GDX declined equivalent to approximately $300 an ounce from the early April top to the mid-May bottom.  Silver crashed in May.

GLD broke down out of a large triangle and is backtesting near the apex.  Symmetry suggests an extreme decline is approaching.

Considering numerous facts, a Gold crash appears to be imminent.

Analysis of symmetry to each side of the Cycle Line supports a capitulation plunge for Silver next.  The next moves suggested by the symmetry match up well with other patterns I am following.  The white line indicated with the 2 green arrows has been an important line of resistance in previous months.

Gold symmetry is extremely bearish as I will show next.

On June 12th, I alerted about an approaching strong rally and "Bear Trap".  Therefore, it is only fair to point out the present "Bull Trap".  The target is some 50-60 points lower than today's 1353 SPX close.

The orange midfork was tested today, and I feel strongly that should provide a very substantial obstacle to further advances in the near term.

Financials (in Red) were outperforming SPX on July 1st.  However, for the last 3 days in a row, they have underperformed SPX, and traded flat for most of the day today.  Additionally, the high for Rifin today was not much higher than July 1st.

The weakening performance of the Financial sector is a warning signal about a looming decline for markets.

My impression is that Silver is working on the last bounce before a major plunge.  Silver rallied from a test near the blue Fibonacci fan support.  I have been targeting approx $35 for SLV, and we are closing in on that level.

We backtested the Main red trendline today as well as the yellow midfork line.  Silver could grind slightly higher, but upside should be minimal from this point.  I will have more detailed analysis on both Gold and Silver coming shortly.

Friday, July 1st was important since it was the anniversary of the major July 1st, 2010 low.  The powerful surge up on Friday was reflective of the capitulation selloff into the same day in 2010.

The pink fork line was backtested Friday, therefore, a minor decline into a July 7th low is favored.  I am seeing Friday, July 8th or Monday, July 11th as the next possible high.


July 22nd could be an important day.  Additional details will be forthcoming at a later date.

We saw a sharp rally last week as anticipated a week ago, but it extended into a power rally phase.  As a result, I recognize from the Big Picture cycle that there are necessary updates and modifications to make to trading plans going forward.

Last week was validation of my big picture plan with a triple bottom now in place as expected, and a power rally kicked off shortly thereafter.  I had a good week overall, but could have better anticipated the strength of the power rally phase.  As mentioned this type of 5-day sequential large rally has only occurred 8 times in history.  My Big Picture cycle called for this, and that is an excellent confirmation considering the odds of such a rally occurring.

I remain bearish from these levels, and see the next major swing down to the 1295 SPX area.  However, after careful review I think we are likely to see some sideways trade first, and slightly higher levels tested.  Addmitedly, I shorted early late last week, and so this coming week I plan to improve that entry, and reshort at more optimal levels.

SPX closed Friday at several major resistance trendlines as shown in the charts below.  Around July 6th appears to be a bottom in my timing cycles, and I plan to cover shorts at that time, and reshort near 1347 SPX levels.  A minor "flashcrash" type of event is quite possible after such an extreme rally, but as I mentioned on Friday, a sideways trading phase would occur first.  I will be monitoring that possibility closely.

The large and unusual swings are going to continue for many months to come.  Bulls and bears beware - it's traders paradise!

Big Picture update.  This is the cycle that called for the unusual power rally last week.
6day Chart
﻿
﻿
Posted by SC at 9:42 AM 4 comments: