Once SVXY cleared the recent high, the likelihood is that it is running to test the previous peak.

Overall a trend sideways has established.  Resistance and support levels are shown.  Notice that relative to SPX, SVXY is considerably weaker on this run. 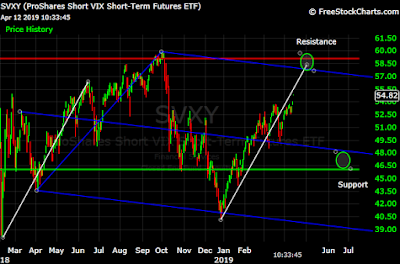 In January 2019 analysis bitcoin was identified as likely to rise to 5,500.  That move is underway.  Once bitcoin broke out above the white trendline, the price spiked.

Bitcoin is approaching double resistance with the red horizontal above.  Once the price objective is reached, bitcoin is set for another fall with the same size as the November decline.  The measured decline with price target is shown. 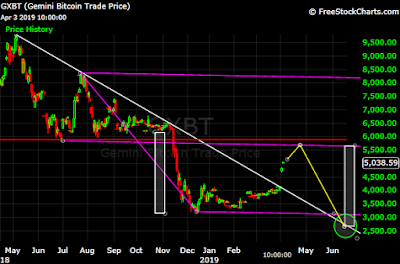 "Bitcoin is likely to be consolidating for a pop next.  Price has been holding in a tight range which typically occurs just before a stronger move. A move up to test the red horizontal next is anticipated."