SPX surged up from late December as predicted by the Deja Vu Cycle.  The red target estimate outlined in late December was reached and slightly exceeded last week, which is fine.

A major cycle peak for SPX is near according to the Deja Vu Cycle.  The topping process will likely be characterized by weeks of sideways and choppy trading with a scary dip in the middle.

In conclusion, SPX is currently testing a broadening top formation trendline.  The next major move in the Deja Vu Cycle in the coming months is a plunge to test, and probably undercut the red trendline. 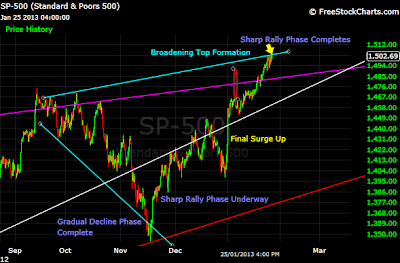 The topping process will likely be characterized by weeks of sideways and choppy trading with a scary dip in the middle as shown on the chart below. 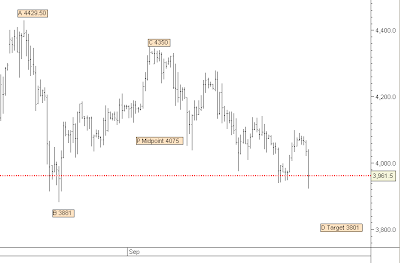 UVXY is likely near a major cycle low and turning point.  Complacency is extremely and unusually high.  The Deja Vu Cycle indicates a dramatically falling market and aggressively rising volatility (VIX) in the months ahead.

Rising volatility should be particularly evident during a decline to the red trendline for SPX. 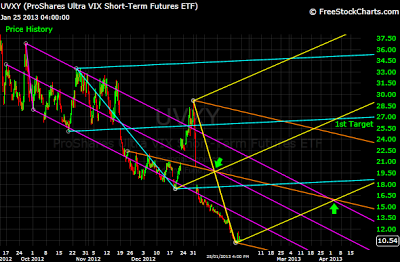 SPX could try to grind just above the yellow line, but watch for a scary dip soon to test near the lower yellow fork in any case. 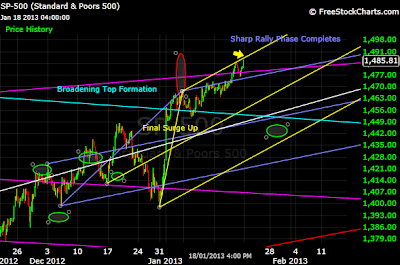 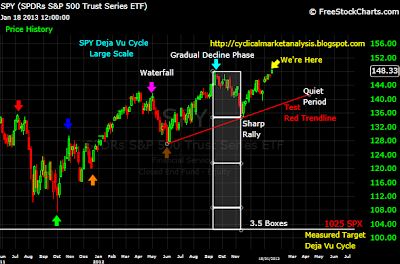 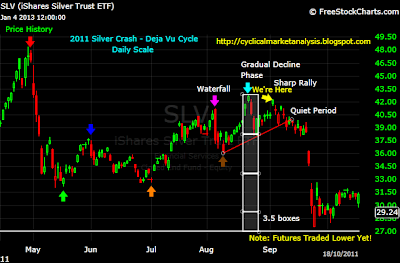 SPX rallied to near the upper red target area in price.  It could overshoot that estimate still, but the Sharp Rally Phase is due to complete soon according to the Deja Vu Cycle.  The Deja Vu Cycle will not pinpoint an exact top, and frankly it is just not important.

What is important is that the Cycle suggests that this market is extremely expensive, and a major downturn can follow completion of this Sharp Rally Phase.

A scary dip could occur within days to near the green target. 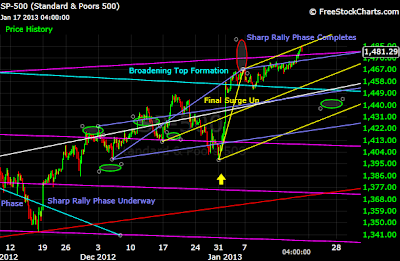 IF the Deja Vu Cycle CONTINUES to unfold, then the VIX faces potential for an extreme volatility move in 2013.
In the past, a move for VIX over the red trendline has resulted in a crisis.  The red trendline was tested for VIX during the recent Fiscal Cliff turmoil in late December.  Importantly, the VIX did not spike up during the October/November decline for SPX, but did spike on a smaller decline for SPX during the Fiscal Cliff event in December.
The VIX spiking on a smaller SPX move may be a warning of danger ahead.  ﻿

The Deja Vu Cycle suggests the potential for a 460 point measured decline in SPX.  As well, the potential exists for a large VIX move during the current economic environment.  Several examples of issues:

1.  Panic could result if people lose faith in the ability of the Fed to provide support to the market.  VIX could rise dramatically in a declining market environment.  The thought may be that if the Fed could not prevent the market from declining, then, is it even possible to stop a decline?

2.   Panic could result if people lose faith in the ability of the Government to deal with the current debt crisis.  The US is only 5 weeks from default by some estimates.  If a solution is found in time to avert a default, concerns about high debt levels may persist anyway.

3.  Recession in the US may be already underway since July 2012 according to ECRI.  The market may not be pricing in the possibility of Recession at current levels.

Fear is a strange animal, and can snowball to irrational levels.  VIX made a rare move during the first week of January 2013 that has not been seen since 1987.  That is clear evidence of unusual market conditions, and therefore, violent movement is possible. 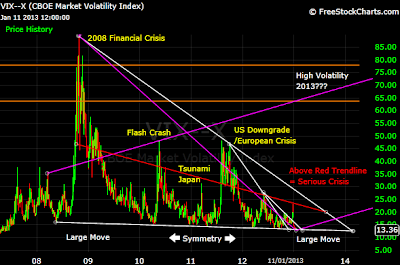 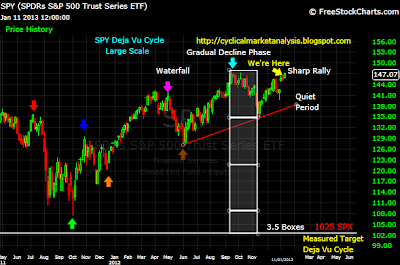 The 5-year Cycle suggests SPX has been struggling at resistance.  The 5-year Cycle indicates the potential for a larger than usual move ahead.
Support is shown much lower.
7Day Chart 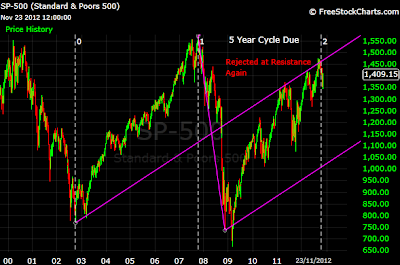 Below are some examples of Large Cap stocks that are not participating in the recent market rally.
Small Caps did rally, and can be a sign of a mature market.  Financials did rally also, but have underperformed for several years, and are just slightly, finally, over 2010 levels.
Daily Chart 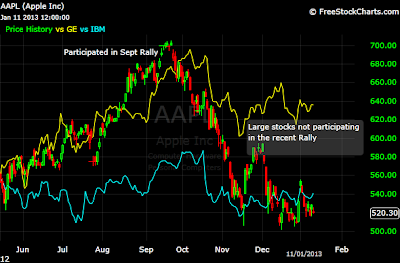 The surge up occurred and the target area was reached Friday, on time, as per analysis from December 27th:

Upside is still possible and a topping process may take some time to play out for much of this week.  The next step will be to watch for signs of waning momentum.

Nevertheless, all minimum conditions have been met according to the sharp rally phase of the Deja Vu Cycle.  Caution is necessary going forward. 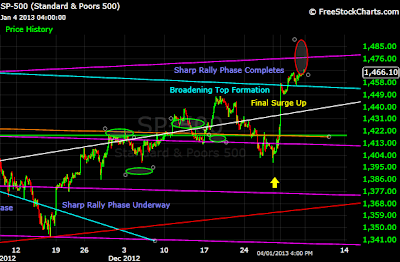 The pattern of trading for SPX continues to be consistent with the Deja Vu Cycle crash pattern.  Notice the large gap up this week eerily matches the Cycle. 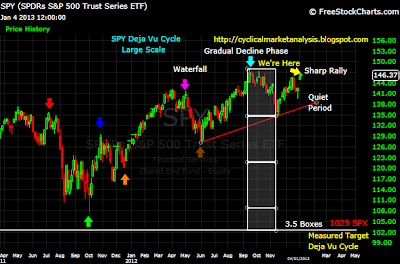 $SPX - Taking it to the Limits

SPX took it to the limits of support, and managed to almost miraculously firm up, and held well on Monday.

While the S&P futures came reasonably close to testing the critical red trendline on Friday, SPX held quite well comparatively.  SPX regular hours holds more weight rather than the futures in this analysis.

This week will be important for confirmation of the next short term movements within the bigger picture Cycle.  The Deja Vu Cycle suggested a move up to the green minimum target at least, in both scenario's, with potential up to the red maximum target area in the more bullish interpretation. 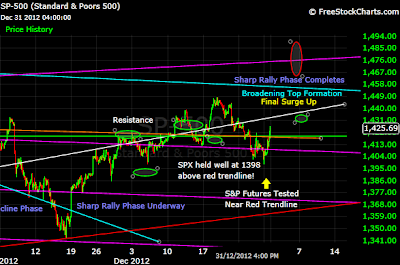 Volatility ETF's were trading strangely on Monday.  It appears to be a fairly extreme short term example of a "fear bubble" that suddenly popped.
Possibly the size of the drop on Monday for UVXY hints at the bullish scenario for SPX playing out.
60min Chart 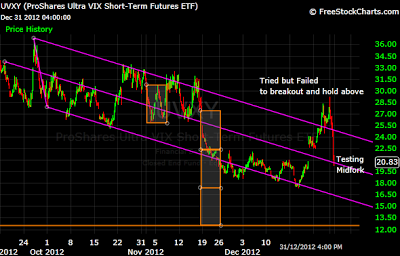